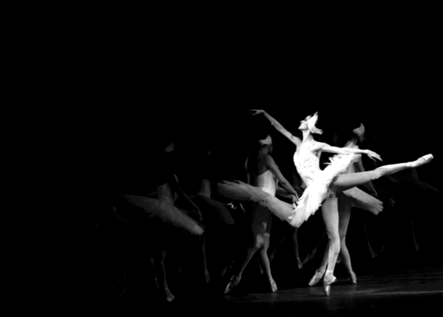 Slow and sustained movements; also, the section of a pas de deux in which the ballerina, partnered by

the danseur, displays her mastery of lyrical movement.   Allegro

rear. The positions of the arms and the height of the raised leg may vary.

A position in which the dancer stands on one leg, the other leg raised behind the body with the knee

bent. A similar position, but with the leg placed in front of the body, may also be called an attitude.

The principal female dancer in a company. The term is misapplied when used to designate any female

dancer. A large company may have two or more ballerinas, the chief one ranked as Prima ballerina.

The resilience, lightness, or spring of a dancer in leaping or jumping movements.

A kick, either high (grand battement) or low (petit battement), which may be executed in any

Any action in which the legs beat together, usually when the dancer is in air.

A batterie movement, usually for the male. One leg kicks high to the front or the back and is held in

A movement in which the dancer, starting in fifth position, jumps upward and returns to the floor in

fifth position but with the position of the feet reversed. He might, for example, start with the right leg

in front and conclude with the right leg in back.

One who selects or invents the steps, movements, and patterns of a ballet. He must relate these

motions to the music, the theme abstract or dramatic and the design of the production in order to

make a ballet with form, sequence, and purpose.

The last section of a pas de deux or of a full ballet.

The chorus of a ballet company; also called the ensemble.

With the full weight of the body on the toes and the ball of the foot.

The unfolding of the leg, accomplished by slowly bending and then straightening the knee as the leg is

raised in an extension (to the front, side, or back) from the floor.

A dance without plot, or that part of a dramatic ballet composed of a series of short dances without

Inward, toward the body.

Outward, away from the body.

A jump directly upward, with the body maintaining a straight line and with multiple changes of

positions of feet in air. An entrechat is an elaboration of the changement de pieds.

Five Positions of the Feet

The five classical positions of the feet. Every ballet step or movement must begin with one of these

positions and return to one of them. (See illustration.)

A turn or spin on one leg, the body being propelled by a whipping motion of the free leg. It is usually

performed by a female dancer.

A gliding step starting from fifth position, opening into second position, and closing in fifth. It may be

held to the floor or used as a low leap.

A step; also used to designate types of dances, as pas seul (solo) and pas de deux (dance for two).

A traveling step in which the dancer may move in any direction on demi-pointe or on pointe. The

A leap, starting from a plié in fifth position. The leading leg is drawn up with bent knee, followed

almost immediately by the other leg. At the peak of the leap, both knees are bent outward to the side,

and the toes are nearly touching. A gargouillade is the same movement, except that the leading leg

A duet. A classical grand pas de deux consists of an entrée, adagio, two solos one executed by the

ballerina; the other done by the danseur and a coda.

A turn of the body done while standing on one leg, the other leg being held in any one of a number of

A bending of the knees with hips, legs, and feet turned outward.

The tip of the toe.

The positions and movements of the arms.

To rise onto pointe or demi-pointe.

A rotary movement of the leg. It can be done in a number of ways, such as on the floor with knee

straight, or in air with a circular rotation of the knee from bent to straight.

Steps done on the ground.

A turn. A pirouette is one kind of tour.

A turn done in air. The dancer springs upward from fifth position, makes one or more complete turns,

and returns to the floor in fifth position.

The body positions of classical ballet in which the limbs are turned out from the hips at a 180 angle.

The fluffy skirt worn by the female dancer. In ballets of the romantic style, the tutu falls to below the

calf. In the later, classical style ballet, it is short enough to reveal the legs completely.